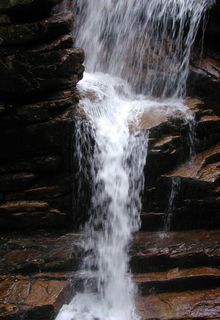 On my way into work this morning, I followed an unusually fitted-out truck and trailor combo. I didn't get a photo (I was driving), but the impression it made will stay with me for a while, at least. I'm not sure what the equipment was for, but I guess it plays a roll some part of paving. Much was stained black and hard to recognize. It might also have been something to do with landscaping, but I don't think so. What fascenated me most and held my attention was the large tank mounted on the truckbed. The tank itself was black with the words "WATER WATER" in bright red across the back.

Now, I know that there are lots of kinds of water: hot water, cold water, ice water, sea water, fresh water, gray water, ground water. But never had I seen or heard of water water. I reasoned that it must be the purest, most chemically consistent form of water—absolutely neutral so that the standard adjectives, hot, cold, wet, clean, dirty, did not apply. I felt honored to have been in the presence of such a notable substance. I wondered about the source of such liquid.

Of course, I also thought about the possibility that someone had been given two sets of labels and rather than sticking one to each side of the tank, chose to slap both on the back. But I quickly dismissed that idea as too mundane.